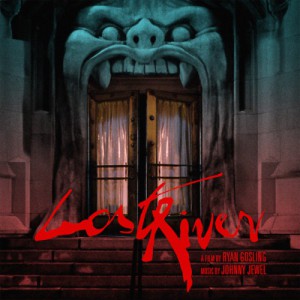 It’s not surprising that Ryan Gosling’s favourite film is East of Eden. Gosling himself tends to play disassociated characters, they watch more than talk. After working with directors such as Nicolas Winding Refn [Only God Forgives] Derek Cianofrance [Beyond The Pines & Blue Valentine], both of whom have contemporary vision – it’s no wonder he wants to use his influences and write and direct. His first film Lost River has received mixed reviews but I am intrigued by it and it’s soundtrack by Johnny Jewell who did the scores to Bronson and Drive.

The film is about a teenager who discovers a road which leads to to secret underwater town whilst his mother is swept into a dark underworld. The genre for the film is Drama and Fantasy and Jewell’s sound wall definitely caters for both.
It opens with a song called Tell Me sung by Irish actress Saoirse Ronan who is also in the film. She sings it in the style of Lana Del Ray and it does sound little like the song Big Eyes. This is followed by Yes [Love Theme] by electronic band Chromatics which Jewell is a member of.

Jewell’s first track is echo’s which is quite slow and beautiful but with a subtle dark undertone. Back to another song this time sung by one of the film’s actors Ben Mendelsohn. Cool Water is sang a little off-key but with feeling which adds to the weirdness creeping into the score. The Dead Zone begins with a dark note glissando which lays flat for a while, percussion then heightens the feeling that you’re drifting. At 6 minutes 47 seconds long the track doesn’t chill as much as puts you somewhere else and you’re just going along with it. Strange I know but then this whole score is wonderfully strange.

The Chromatics sing a very wispy version of Blue Moon. Carousel includes what sounds like pipes and a school bell to create another listenable oddity. If instrumental singles were released like they were a few years ago then Chromatic’s Yes [Symmetry Remix] would be a contender for the top spot. Spellbound does chill with it’s dull throb in the background and long held notes, there is a sound like the wind and another bell punctuates this almost silent track.
The cue Death is sparse but eerie and Franky’s Theme has a 3 note percussion rift running it through it with a distant drum and very little else except a low electronic hum underneath. It makes you feel as if you are inside your own dream desperately trying to get out. All this ends with the ambient Yes [Lullaby from Lost River], a melodic childlike theme.

With soundbites from the film this is quite a long soundtrack but the more I listened to it the further I wanted to explore it. It’s enigmatic and it pulls you in but you do end up feeling that you don’t necessarily have a better understanding of the film itself by listening to it’s score. It’s not a soundtrack I will listen to over and over again but it deserves attention for the strange and other-worldly atmosphere Jewell has successfully created.

Also available on iTunes and Soptify