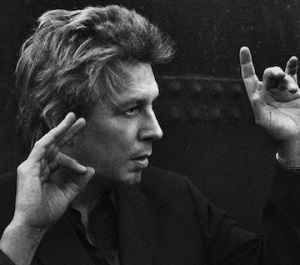 His oeuvre includes music composed for film, opera, ballet, symphony orchestras and theatre, as well as chamber music. He is one of the most versatile composers of contemporary music; winner of the Oscar, Golden Globe and World Soundtrack Award. We are proud to announce that the winner of the 1st annual Wojciech Kilar Award is Elliot Goldenthal.

On April 30, 2015 the Wojciech Kilar Award’s Expert Council, consisting of directors of the most important Polish cultural institutions, selected the winner of the first edition of the award established in 2014 by the Presidents of Krakow and Katowice. Its aim is primarily to honor and celebrate the memory of Wojciech Kilar, as well as emphasize the importance of the ethos of the composer in the interdisciplinary world of film. With the Award’s establishment, name and accomplishments of Wojciech Kilar, one of the most recognizable Polish composers of the 20th and 21st centuries, will gain a new international dimension.

The Award consists of a common fund for a recording session with the participation of any orchestra from Silesia and Krakow. This is the second important award granted at the Krakow Film Music Festival. Since 2013, the festival grants a special statuette to a FMF Young Talent Award winner, a young composer that has succeeded in winning the international competition in which the task is to compose music for film clips, animation or video games.

The Kilar Award is granted for the lifetime achievement to composers of film music who remain faithful to the traditional art of composing, write scores that in isolation from the image do not lose clarity, and efficiently use the language of music, producing rich and distinct colors, shades and textures in their work.

The criteria for the Wojciech Kilar Award turn away from the quest for industrialization and the primacy of special effects in film music soundtracks. Founding this Award is to a way to take part in the debate by juxtaposing the traditional art of composing film music with its assembly line, business-like alternative. The vast majority of composers producing music as if in a factory do not have direct contact with autonomous work.Often standing at the forefront, the composer is just the author of several themes that are harmonized, instrumented and prepared by a staff of anonymous musicians, says Robert Piaskowski, Artistic Director of the Krakow FMF, the originator of the Award. Our duty is to emphasize the importance and worth of film music often called the “new classic”.

The Expert Council of the Wojciech Kilar Award, from several renowned international names provided by the program team of the Film Music Festival, almost unanimously selected the winner of the 1st edition. It is Elliot Goldenthal, winner of the Oscar, Golden Globe and World Soundtrack Awards for Best Original Music for the film Frida (2002), directed by Julie Taymor. Nominated for the Pulitzer Prize in the field of classical music, winner of two Golden Globes, three Grammy Awards, two Tony awards, three Chicago Film Critics Association Awards (CFCA),and six awards granted by the American Society of Composers, Authors and Publishers (ASCAP), including the ASCAP Founders Award in March 2015. The Kilar Award will therefore be granted to one of the most versatile composers of contemporary music, who has composed music for film, opera, ballet, symphony orchestras and theater, as well as chamber music. In his music, Goldenthal balances between dissonant, atonal music and classical harmony, often during a single phrase, blending traditional orchestral music with jazz and rock, as well as electronic music. He feels comfortable working on pieces extensive symphonically and chorally as well as more ambient and intimate, creating both traditional and unusual compositions. Goldenthal is highly valued for his unique, dark, and almostdense style. None of the contemporary composers of film music use their talent in creating works in such a variety of musical genres.

The Director of the National Polish Radio Symphony Orchestra Joanna Wnuk-Nazarowa justified her choice with these words: He engages with his craft brilliantly and stands in line with such great composers as Wagner, Strauss, Mahler or Bruckner. My point primarily is about his thinking and understanding of form. His scores are dense and extremely professional; he maintains the balance between melody and harmony, creates a very personal narrative and style, and possesses strong understanding of the whole form. This is a truly novelistic musical narrative.

Editor-in-Chief of Polish Music Publishing Daniel Cichy said that, In his work, ElliotGoldenthal combines respect for tradition, humility in relation to the composer’s craft, and remarkable ability to connect with orchestras and to fully feel and understand the medium of film. Juggling styles and conventions with ease, frequently on the verge between aesthetic worlds, Goldenthal masterfully complements the film director’s vision, sometimes following in-line with it and almost illustrating the protagonists’ emotions, and other times standing in opposition to the film’s expression, creating a contrapuntal narrative painting with sound. Interestingly, however, despite being met with a diversity of styles and a variety of orchestrations as well as the need to intelligently embody ofthe film’s theme, genre and form, the composer always creates a coherent musical message. And this is a trait that distinguishes the most prominent and outstanding from the rest.

In 1996, the Pacific Symphony Orchestra commissioned Goldenthal to compose the symphonic Fire Water Paper: A Vietnam Oratorio to commemorate the 20th anniversary of the end of the war in Vietnam. A year later, for the American Ballet Theatre he wrote the ballet Othello, which premiered at the Metropolitan Opera. In 2013, Goldenthal recomposed music for the ballet to fit the needs of a new symphonic compositionOthello Symphony, which was recorded in Alvernia Studios with the AUKSO orchestra, conducted by Marek Mos. Othello will have its Revival Premiere as part of the American Ballet Theatre’s 75th anniversary season taking place at the Metropolitan Opera House in New York with four performances running May 19-21, 2015. In June 2006, the Los Angeles Opera premiered the opera Grendel directed by Julie Taymor with original music by Elliot Goldenthal, for which the composer received a nomination for a Pulitzer Prize in the category of music in 2007.

Goldenthal most recently composed the original music for an acclaimed production of William Shakespeare’s A Midsummer Night’s Dream directed by Julie Taymor for Theatre for a New Audience in Fall 2013 which received four Drama Desk Nominations including outstanding music in a play. His Symphony in G Sharp Minor had its world premiere with the Pacific Symphony in Costa Mesa, California in May 2014, and received the Orange County Register’s Reger Award for “Best New Symphony.” An album of the symphony will be released in May 2015.

A cinematic theatrical experience of A Midsummer Night’s Dream had its international premiere at the Toronto International Film Festival in September 2014, directed by Taymor with original music by Goldenthal.

Goldenthal collaborated with virtuoso violinist Robert McDuffie and the McDuffie Center for Strings Ensemble (MCS) who premiered a new work by Goldenthal on in February 2015 at Le Poisson Rouge in New York City. Goldenthal composed original music and soundscapes for the Julie Taymor-directed play Grounded starring Anne Hathaway which opened on April 26 and runs through May 24 at the Public Theater in New York.

The Wojciech Kilar Award is sponsored by the Presidents of Krakow and Katowice and will be granted alternately in Krakow and Katowice. It will be presented for the first time on May 28, 2015 during the Polish Music Gala: Scoring4Wajda as part of the 8th Krakow Film Music Festival. The concert will be recorded live by the National Audiovisual Institute and Polish Television Channel 2.