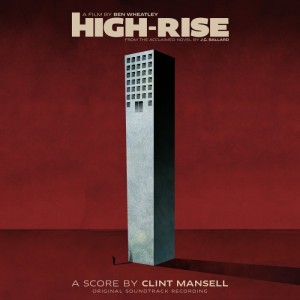 Having got sucked in not by the actual film trailer but a teaser which is an advertisement to encourage you to go and live in the self sustained High-Rise, I then watched the trailer proper which is using Tangerine Dream as it’s back music. It seemed to suit the isolation I felt when looking at the soundtrack’s minimalist artwork. I was eager to listen.
Reading director Ben Wheatley’s swear ridden, true heart talk writing on his contacting, meeting and working with composer Clint Mansell in the CD’s sleeve notes and then the appreciative, fan fed response from Mansell – fan on fan .. I was more eager to listen.

J.G Ballard’s book set in a dystonia future telling of a high rise of embedded class structure where humans face their base, primal instincts has been in the making for over 30 years. At one time Nicolas Roeg was to direct and also David Cronenberg. And here we are last with Ben Wheatley at the helm and I am eager to see it.

The score opens with Critical Mass, a fanfare of violins with a ‘pioneer’ feel to it. It brags of success and ends on an eerie tone that almost tags straight onto the following track Silent Corridors featuring  a lone whistler – whistling in soundtracks has always freaked me out. If used over menacing music it highlights that the whistler is unhinged, in a ‘happy/carefree’ world of their own whilst the music is shouting something horrible is happening.
The World Beyond The High-Rise is a beautiful cue with a 3 note leitmotif which somehow manages to portray hope in an off-kilter world. It also has a tenderness about it. I played it three times before I could move on. The Circle of Women hitches back on to the opening track, which both have a feel of Aaron Copland in them.
Built, Not For Man, But For Man’s Absence has a pulse to it, not an urgency but a steady pulse perhaps symbolising the lifeline of the High-rise itself, this is used in several tracks. The malice which comes through in Danger In The Streets Of The Sky would fit a 1940’s film noir movie perfectly. It’s sudden, discordant brass notes displace and disturb – this is one of the best cues. Strike that as there isn’t a flawed track on this score!
A Royal Flying School soars then broods with Mansell’s legendary use of ‘strange’ instruments and is taken over by dominant percussion. And as for the closing track Blood Garden – there are so many genre ‘bytes’ which meld together here. Again I listened three times in a row with pure fascination.

It’s always a challenge to use the written word to describe how something sounds and no more so than in reviewing this superb score which truly has to be experienced. Cinematic in scope and beautifully orchestrated, I can’t do it justice and can only say that this year has to deliver something astonishing for me not to mark this as my ‘Best Score’. In many ways it’s not just how it sounds but what it conjures up and the Ballard world it is inhabiting.

“The soundtrack sounded incredible in the cinema, ” I was very f**king happy indeed…Revel in the sound of a bombastic and hubristic 70s that was doomed to failure…Enjoy.”
Ben Wheatley

1. Critical Mass
2. Silent Corridors
3. The World Beyond The High-Rise
4. The Vertical City
5. The Circle Of Women
6. “Built, Not For Man, But For Man’s Absence”
7. Danger In The Streets Of The Sky
8. “Somehow The High-Rise Played Into The Hands Of The Most Petty Impulse”
9. Cine-Camera Cinema
10. A Royal Flying School
11. The Evening’s Entertainment
12. Blood Garden