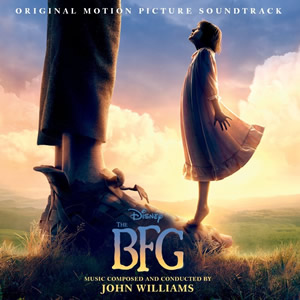 The Big Friendly Giant is a short story by Roald Dahl written in 1982 and has sold over 37 million copies in the UK. It’s amazing that the only treatment this well loved story has received is an animated tv adaption in 1989 and as a theatre production. It’s taken far too long to get to the big screen and who better to film it than Steven Spielberg. And of course Spielberg’s right hand man as far as scoring the movie is maestro John Williams.

Apart from the cover of the soundtrack which I personally think doesn’t work at all, this score is pure Williams. A composers musical identity can be heard in a change of a chord, a time signature or just the same instruments they use.

So in the first track of BFG, Overture, you hear all these familiarities and perhaps the odd bar which sounds like it’s from another Williams score. This does not matter because with a full orchestra Williams is the supreme maestro and you immediately feel at home.

I have read the word ‘delightful’ in reviews of this soundtrack and of course it is. Whilst there is not essentially anything new to grasp onto except for the ‘delightful’ theme which runs through it, you really don’t care because it’s JW and he never dissapoints.

I love the flighty flutes in Overture, the love waltz in To Giant Country, the humour in Fleshlumpeater and again the fantastic flutes of Dream Jars. Also the grandness of Frolic and the military atmosphere of Meeting With Queen.