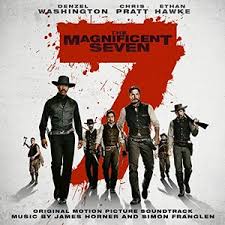 It’s a good Sunday when work is halted, domestic errands and jobs are finished and all that remains is the ultimate aim of sitting down and listening to some soundtracks. Today is such a day and almost 6 weeks after it’s release, I have stopped being so ‘precious’ and finally bit the bullet. I am listening to James Horner’s last ever soundtrack – The Magnificent Seven.
Even typing ‘last ever’ is painful. For me and many others he has been a huge part of my film music journey. Made me feel emotions I never knew I had and was a ‘go to’ whenever I needed my spirits lifted. So much has been written about Horner so it’s time just to listen.

The emergence of this score is just as sad as Horner’s tragic death. He had done the score to a previous Antoine Fuqua [director of The Magnificent Seven] film, Southpaw and influenced Fuqua to direct the remake of this classic western. Horner, even though there was not yet anyone signed to score the film, read the screenplay and went on to record a suite based on his interpretation of said screenplay with the help of his friend and collaborator Simon Franglen.
Heartbreakingly Horner intended to surprise Fuqua with the suite in a bid to actually do a full score for him but of course it never happened. Franglen went on to play Horner’s music which Fuqua loved! And so Franglen several others of Horner’s long time collaboraters converted the suite into a full score.  Thinking about this it must have been emotionally quite difficult for them doing this but they have done him proud.

I didn’t really know what to expect as Elmer Bernstein’s score to the original 1960 movie is one of the great, great soundtracks. Considering it’s a ‘fleshing out’ of a suite it’s a very cohesive score with some depth. There are hints of a western score but they are not overdone.

In Jonathan Broxton’s [MOVIE MUSIC UK] excellent review he writes of how this last score is in it’s way an homage with many cue references from Horners score, and I agree. Deliberate or not they are wonderful to hear.

These are the references I heard:
Lighting The Fuse – in there is a quirky and short trumpet piece which I am convinced is from the Sneakers
Street Slaughter has echoes of Avatar
Nuances of Field of Dreams in Red Harvest

For me the strongest cue is The Darkest Hour which is superbly orchestrated. The cue which prompted the reality of no longer being able to listen to any new Horner music overcame me in The House of Judgement and the tears continued with the very last track Seven Riders.

Nice touch that it ended with Bernstein’s glorious title them from the original film.