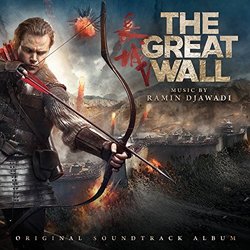 THE GREAT WALL by Ramin Djawadi

Why am I not liking this score I ask myself, after all it’s by Game of Thrones composer Ramin Djawadi But after a second  listen it’s not growing on me  but then ironically it’s not a disappointment. I imagined it to be a passable action score complete with ethnic instruments and that it exactly what it is. Well orchestrated with a certain tension  but the motif is weak even with a full chorus backing.

The opening track Nameless Order, gets the interest going but soon fades as most of the tracks being action cues just meld into one. The most emotional pull is in We Are Not The Same which takes a break from all the fighting, in fact it’s quite beautiful with it’s strong allegiance to ethnic instruments. The last track Ixn Ren has some of the impact I was expecting and  which I would liked to have heard throughout the score. With a full orchestra and the essential drums it had all of the ingredients but will very little flavour.

Chris Tilton has Assassin’s Creed Unity Vol 1 and 5 series of the TV show Fringe under his belt and this soundtrack to the PS4 sic-fi,action adventure game is a really notable addition to his catalogue. A lot of action games score can sound quite flat – just music to keep the momentum going but Divide transcends all that.

After a belter of a Trailer Mix song [title: Divided] featuring Tori Metzler the mood of intrigue and tension never drops from then on. It briskly moves onto the pulsating Steal The Future. There is a winding motif which works it’s way the score very elegantly and when pitched against some synth tracks it’s truly thrilling. Runaway Maglev is a good example of this. There is real tension in this core as well pathos which dominates through Marion’s Case.

I love all of this soundtrack and could easily have it running through my playlist on rewind [as in fact I have!] and if I may say as a way of compliment that The Last Stop has elements of Daft Punks Solar Sailor from Tron Legacy. And what delights there are … there is Deluxe version!

This movie deals with the main character, who loses his wife, struggling to relate to his adopted son Daniel.  In a last act of desperation he takes Daniel to Columbia to look for the boy’s biological mother

Struck is a Danish composer and I quote from his blog “Struck’s sound is a mix of electronic soundscapes and organic instruments with strong signature themes that sums up the DNA of the movie.” And this is exactly what this soundtrack does, it creates a landscape – Daniel’s Theme is a superb study of disconnection and loss, a short cue which pulls you straight in.

In fact before I went to his website I wrote in my notes ‘full of short cues which are really mood palletes which make a whole”.  I was intrigued by this score and should imagine it fits the film like a glove.

I watched the trailer to this German film, loosely translated: Spies of the Peace – and I got completely hooked. Two former (shall we say ageing) Stasi agent plus one other somehow get to embark on a dangerous mission to save a kidnapped president!

They seem somewhat inept to say the least. All I can say about the score is that it’s utterly mad and very listenable. Mad because there is a stack of dialogue from the film included, not just at the start of a cue put interrupting part way through a cue! The music is pastiche 70’s spy music complete with twangy guitars and vibrant brass complete with 007 twinges.

It’s fun, great fun and worth a listen if only for the opening song Old Agent Man sung in English.