From one of the busiest composers around and one of the most diverse. I am now a confirmed fan of this Spanish scorist and accomplished cello payer. This soundtrack colours a dark, intense thriller involving murder and manipulation and and you have no doubt of this as you listen to track upon track of full throttle darkness.

The first track Goodman starts with a low note cello intent on driving you mad as it just keeps going onward in the background as the orchestra dances around it, it’s quite a pull. I try not to compare too often but this is a good comparison – El Inivitado Invisible has those long violin notes which rise and then just hang there just like the classic scores of Bernard Herrmann. In La Pesadillla there is  what I can only describe as a continuous string vibration in the background akin to the sound of swarming bees, it’s very effective and really niggles at your senses. It appears on a more buzzy level in Tu No Quieres Perderlo Todo Verdad is a winding track with wonderful chord changes, there is so much going on in this cue, subtle and compelling. The last track has such gravitas starting with a sombre funereal drone, violins slowly come in and build until the strings can not reach any higher. There is no escaping this track it is really taking you somewhere … and then it doesn’t. It stops and you are left with a drum beat and then it’s back to how it sounded in the first track, jaunty and as if all was ok after all!

There is no motif as such but there is a pattern which journeys you along and there are many long, unswerving notes which just hang there giving a chilling sense of terror. This is a score which definitely gets under your skin!

The score is performed by the Euskadi Symphony Orchestra who do such a brilliant job under the baton of the Velazquez. The album also includes the original song “Nadie va a venir a buscarte,” composed by Velázquez and performed by Zahara.

“This started off with all of us piling into a room and playing together. I had this idea: How do these women think differently about mathematics? They dance about math. The rhythm shouldn’t be straight, it should swing a little. It really was the three of us. People don’t understand that we really do work well as musicians in bands.
Hans Zimmer

Initially this was a problem for me, I don’t really like it when two composers work on a soundtrack let alone three. Call me a purist but I have heard a few collaborations on scores and they always come across as uneven. So I put some work in and read about how they they put it all together. Williams is one the films producers who was working on some songs with a 60’s vibe, Zimmer said that he would have “the right playbook”. And of course Wallfisch had previously contributed music to Zimmer’s ‘Batman versus Superman: Dawn of Justice’ score. It still didn’t sell the idea to me but I settled sown to listen to the score.

Hidden Figures is the story [not well known before the movie] of African American women working at NASA in the early 60″s.  It opens with Katherine, a plaintive piano that is overtaken by a female voice which accompanies it well. Mission Control gives us the first rush of a ‘spacey’ sound – a short pulse with a driving under bass. This returns in the start of Space Task Group, the piano returns and the low tones telling of the continued failures of the group. Plucked strings and a short base line gives a comedic nuance to Slice of Pie.

Redacted is a joy of a cue with those plucky strings re-apearring and then at 1:01 a bass and a muted trumpet make a delicious sound [I love this cue!] Redstone is another strong cue where  ‘babbling’ voices gives a sense of a puzzled mind working at 100 miles an hour, it’s a clever twist. The babble is reprised in the tense cue Launch. Rocket Peril is not short of a small symphony which soars.

All the rich elements which make this soundtrack follow through in cue after cue, giving the soundtrack a richness of texture. It’s a soundtrack I will return to. To say it has a feel-good factor does not cheapen the overall score, it strives and lifts. I heard the signatures of all three composers albeit that Williams touch only came to my mind a couple of times. Has it changed my mind about collaborations? Well, I will admit that as much as I really enjoyed this score I think I remain cautious.

Note that there is also Hidden Figures The Album featuring songs used in the film together with songs composed by Pharrell Williams, also on the Columbia label.

From Lakeshore press release:
“A pitch black, wryly British comedy, PREVENGE follows Ruth, played by Alice Lowe,a pregnant woman on a killing spree that’s as funny as it is vicious. It’s her misanthropic unborn baby dictating Ruth’s actions, holding society responsible for the absence of a father. The child speaks to Ruth from the womb, coaching her to lure and ultimately kill her unsuspecting victims.  PREVENGE marks the directorial debut from Lowe, who is a true triple threat, writing, directing, and acting in the film during her own real-life pregnancy.
PREVENGE is Alice’s directorial feature debut. She wrote, starred in, and directed it whilst 7-8 months pregnant with her first child, who also appears in the film. Alice was one of the BIFA nominees for ‘best debut director’.”

I became an Alice Lowe fan with the film Sightseers [2012] , and as I have just a teeny weeny, ever so so slight ‘connection’ to her as she went to school with a cousin of mine [I said it was slight :-)], it’s only fair that I should review the films soundtrack. Here’s a little bit of info on Toy drum from the press release:

“Toydrum are a duo who sneak into the consciousness. Not for them the full frontal assault but, instead, a drip-feed of classy work that many may know without knowing. Their hugely acclaimed work with the late singer-songwriter Gavin Clark lit up Shane Meadows’ ‘This Is England ‘90’, their rework of John Lennon’s ‘How Do You Sleep’ led Noel Gallagher to have them remix his High Flying Birds hit ‘In The Heat of the Moment’ (which, in turn, soundtracked last year’s epic ad for the latest ‘Assassin’s Creed’ game), and their soundtracks for films such as the recent Tye Sheridan-starring thriller ‘Detour’ and Alice Lowe’s 2016 Venice Film Festival opener, ‘Prevenge’, have broadened their appeal further.”

Intriguing! As is the soundtrack. It starts appropriately with Intro which is as disconnected as you can get with a pulse running through it which perhaps is the baby’s heart. Biological Clockwork (The Train) is where we are introduced to the voice of the unborn baby saying “It’s OK, I’m here”. The rhythm of the synths obviously suggests the motion of the train with a splendid flurry of 80’s style synth. Fury Pt 1 & 2[Rework] is dominated by  deep bass with a flat, synth chime which resonates that ‘something is not quite right” … putting it mildly. Have to say that this a track which will be loaded on to my non-film playlist!

We get to the darkness in Visions Of (Nice Guy Josh)/Killing For Two, the first half is a cold eerie sound palette with a siren sound which is still there but comes in after a childlike toy sound. Climbing The Walls (Pt 1] also has a pulse but this time it sounds like a chilling, muted voice tying to say something. Crazy Bitch/Hormonal Bliss had me laughing at the very start due to the baby voice saying “Do it, do it now” but then it goes into a rich, deep synth riff which I wanted to hear more of but as with quite a few of the tracks ,they have  2 or 3 cues in 1 track. I guess it’s because they would be too short on their own.

Mostly mood tracks with bursts of great synth, all enhanced with the baby voice starting off some tracks. It creates exactly what is required – fear, madness, disconnectedness. I longed for more of the deep synths but’s that just my love of them, this is a solid thriller/horror score which paints only one colour – BLACK! 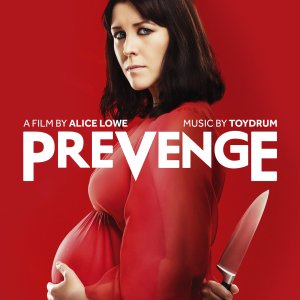 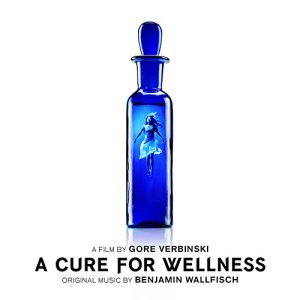 This is by far one of the most interesting of Wallfisch’s scores. Given the eerie subject matter – a company’s CEO is in an idyllic but mysterious ‘wellness centre’ in the Swiss Alps. An employee, sent to retrieve him, who soon realises that the spa treatments are not what they appear to be – the scope is quite wide. And with cues entitled .. Terrible Darkness, Nobody Ever Leaves and Clearly He’s Lost His Mind, Wallfisch has definitively delivered.

It opens with a young female voice humming a short refrain which we hear throughout the score and which has an old world feel about. Rites is a strong cue, dark and ethereal with chorus and very deep mail voices [such as in Buddhist chants], these seem to rise from another world. Feuerwalzer is a waltz intertwined with a full orchestral dramatic cue. Clearly He’s Lost His Mind starts with music that would have suited the end piece in The Shining. The end cue, Volmer’s Lab has a childlike feel, almost a message after the mayhem trying to assure us that everything is well. Volmer Institut has an unexpected beauty about it whilst Lipstick is almost indescribable and sounds like continued distorted volume!
This is an odd score for a very odd film but it’s totally compelling. The mix of orchestral works with some of the darkness sounds I have ever heard on a soundtrack, give this score a overwhelming sense of fear and madness.