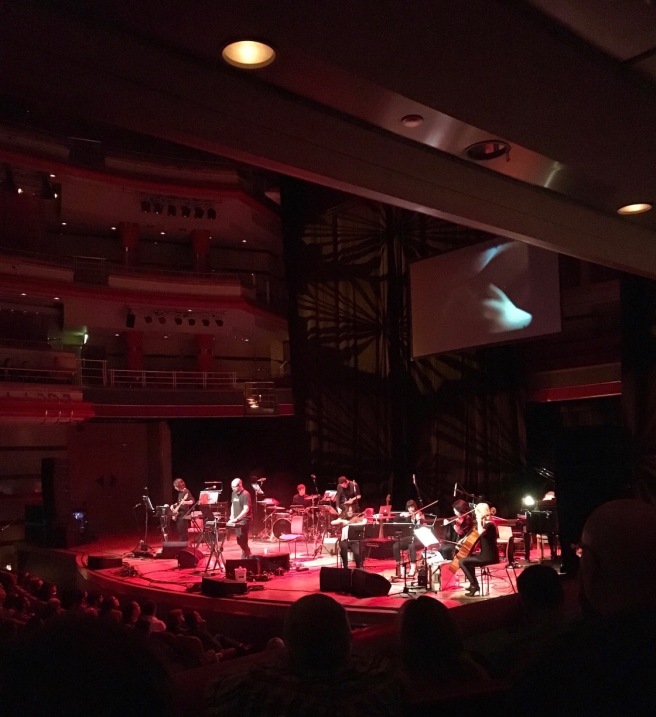 This was a low key affair, intimate like a night club gig yet held in one of the best symphony halls in the UK. The start time was pushed back by 30 minutes, no intermission and it will end at 9.30pm. A small set piece was laid out: fullest of drum kits, numerous keyboards, 4 chairs for violins and cello ready for the The Kronos Quartet, 2 guitars, piano and the obligatory Apple laptops. High up was a not too large screen but big enough for the 3 quarter filled hall.

Short, to the point introduction by the cellist and with lack of fanfare, a black jeaned, t-shirted and bespectacled Clint Mansell strode onto centre stage. After rapturous welcome applause Mansell said it had been 11 years since he had been home in Birmingham. Even though he now lives in L.A. it was comforting to find he had not lost any of his home accent.  Without any ado he said this is ‘Noah’ which kick started huge speakers into action. It was exciting and I immediately vowed to revisit this score when I got home.

It was accompanied by random scenes on the screen that were designed to displace – a stag in the night. A child’s eyes. Fox in a den, a watery eye. Mansell talked about how scoring had change his life and told us all ‘don’t be afraid of change’ and then introduced the next piece of music which not only launched his film music career but was also the directorial debut of Darren Aronofsky – the 1998 film Pi. The video images became stronger including ants and snakes. Mansell played the synth, rocking back and forth gently. He later went on to play electric guitar.

Mansell was very friendly and shared his journey towards scoring recalling an hilarious story about when ‘he got a call from Madonna’ to score a movie she had just made. He genuinely seemed to be in awe of meeting her and how his career was moving. He then introduced his music to Moon [2009] likening it to the isolation you could feel in sprawling Los Angeles. Visuals here were vast land and skyscapes.
I should note that he simply introduced each piece by the title of the film and not specific tracks the next one being the recently released High-Rise, a score I am already in love with so it was very cool to listen to some of it live. More chat and this time it was about a film which had a pre-release at the Mac [Birmingham] which went on to change the course of his life – another  Aronofsky film, Requiem For Dream. This produced some whoops and cheers from the audience, Lux Aeterna being somewhat of a Mansell anthem. Live it was fierce and edgy, bursting out of the speakers.

Further evidence if him not loosing his roots was his reference to all the places he had played when in the groups Eden and Pop Will Eat Itself, including the Villa Leisure Centre. It was clear by the audience reaction that he had some die-hard fans from those days in the hall. Next was Black Swan with it’s serene beginning spiraling into electronic confusion, loved it!
All too quickly he was thanking us all for coming and with that he played out with Death Is The Road To Awe from The Fountain [2006]. During the course of the concert he mentioned twice that people may not’get his’ music. To me if you push aside the traditional routes of film soundtrack scoring, let go and totally immerse yourself in the Mansell sound you will not be disappointed. Live and loud it was truly a thrilling experience. 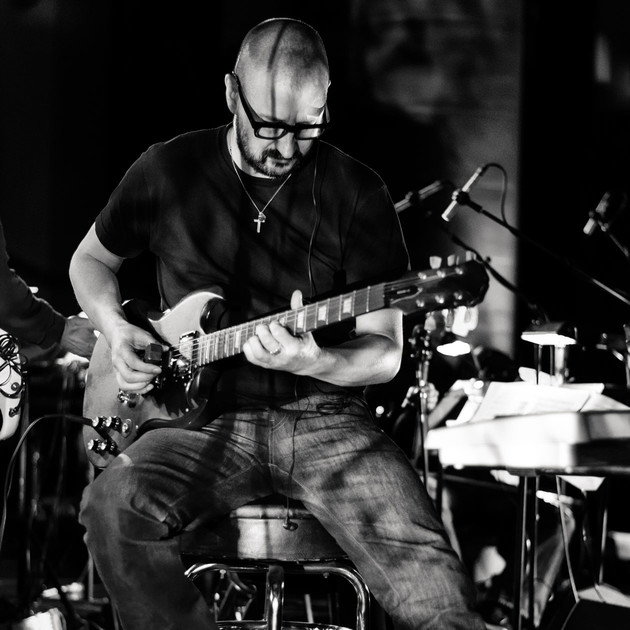